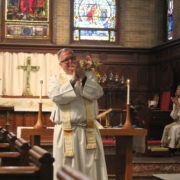 The Rev. Samuel J. Smith began service at St. Paul’s in August 2015. Prior to moving to Stockbridge he held several different positions: He served St. Michael’s Church on the Upper West Side of Manhattan as its Assistant Priest; he was the Director of Programs for Episcopal Charities, the outreach arm of the Diocese of New York; he served as Interim Priest at Holy Trinity Church in the Inwood neighborhood of Manhattan; and he was an assisting priest at the Cathedral Church of St. John the Divine.

A native of Texas, Sam is the son of a United Methodist Pastor. Before beginning his vocation in the Church he worked in professional opera for 17 years, primarily in the areas of administration and communications. He holds degrees from Southwestern University in Georgetown, TX (a bachelor’s degree in vocal performance), Indiana University (a master’s degree in Stage Direction for Opera) and General Theological Seminary (a Master of Divinity Degree). While at General, Sam served as the Seminary’s Chief Sacristan; he also received the Seminary’s top prize for excellence in preaching.

Sam lives in Stockbridge with his husband, Don and their Scottish Terrier. Sam and Don are avid theater-goers, and enjoy all kinds of culture, as well as reading, long walks, and exploration of the Berkshires. The Rev. Jane G. Tillman became priest associate at St. Paul’s in April 2016.  A bivocational priest, Jane was ordained a priest at St. Paul’s in 2014.  After her ordination that served as a supply priest to several Episcopal congregations in Berkshire County.

Jane is a lifelong Episcopalian and native of North Carolina, and has lived in the Berkshires for twenty-two years.  Prior to ordination, as a layperson Jane taught high school Sunday school, served on the Vestry, was a lay reader, member of the altar guild, lay Eucharistic minister, and a member of the Cathedral Chapter.  She is interested in liturgy and in social justice issues and is a member of the Social Justice Committee for the Diocese of Western Massachusetts. 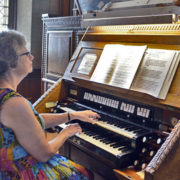